The LET officers focused on homes, schools, businesses and parks in the White City area, including:

During a weapon sweep of the White City Estate, officers recovered weapons including a long kitchen knife and a baton, all of which were taken to the local police station for disposal.

LET officer Ian Baron commented: “We’re working hard to take these weapons off the street. Removing even just a handful of weapons can make a huge difference.”

The LET officers spent the day knocking on doors and talking to hundreds of residents on the estate about anti-social behaviour in the area to learn how they can help. 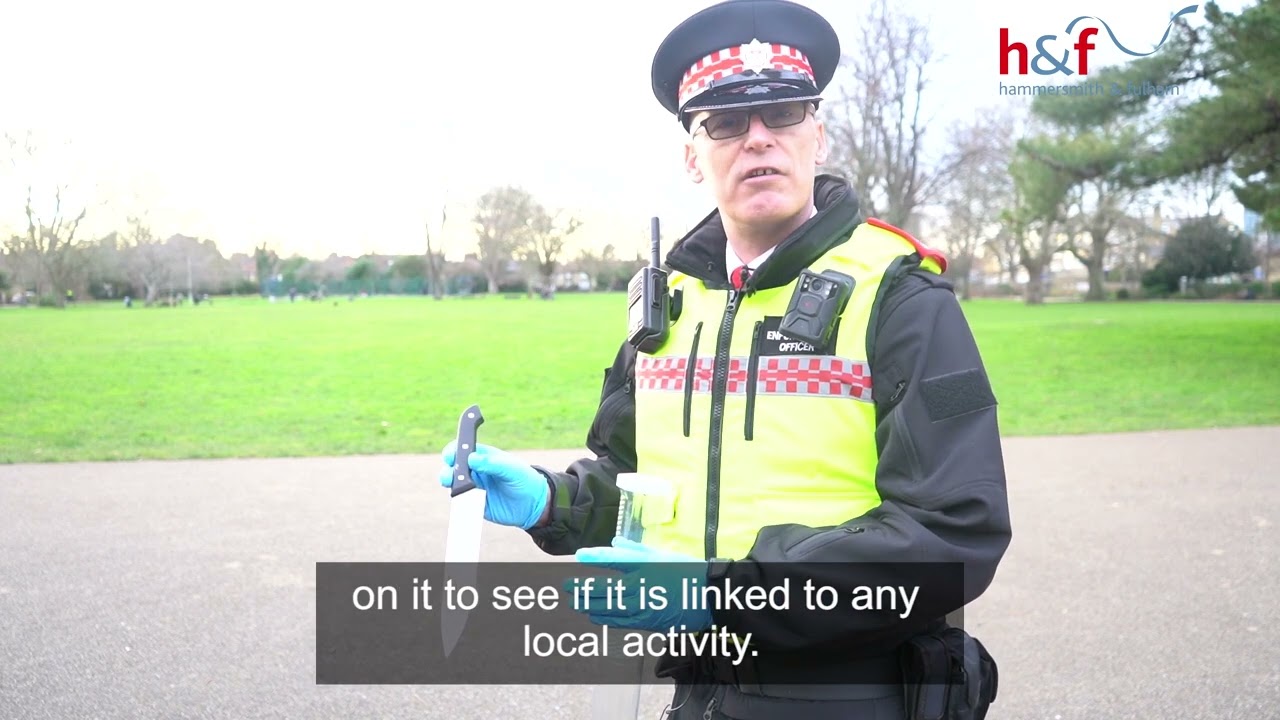 “We set the Law Enforcement Team up last summer, because police numbers were down, and crime was up across the UK. And we simply weren’t prepared to tolerate the increase in crime anywhere, let alone Hammersmith & Fulham.

They are a real part of our force to deal with crime and anti-social behaviour.”

During the 24-hour operation, LET officers:

What is the LET and what do our officers do?

H&F’s new Law Enforcement Team is a 72-stong team working with residents to keep people across the borough safe. The team seeks to crack down on knife and drug crime, as well as anti-social behaviour and fly tipping.

Since its launch in May 2021, the team has responded to more than 2,000 calls from H&F residents and acted on more than 35,000 anti-social behaviour related incidents.

Want to learn more about our officers? We’ve answered some of the most frequently asked questions our residents have about the LET.

What enforcement powers do LET officers have?

The team can enforce a range of legislation and assist all blue light services with a range of tasks.

What kind of training do the LET officers undergo?

All LET officers are Community Safety Accreditation Scheme (CSAS) trained. This police accreditation enables officers to obtain the name and address of offenders and assist all blue light services with a range of tasks

Community Safety Accredited Scheme (CSAS) involved conflict management training and H&S, understanding our legislation and regulations, powers officers will work within, and the powers given to us by the Police under this scheme.

How are LET officers different from the police?

While our officers are not the police, they do work proactively with all emergency services to get our residents and visitors the support they need – when they need it.

Together with the council's 24/7 CCTV team, they allow for additional eyes to support the police. In an emergency, they can contact the police via our CCTV control room, who have a direct link to the police if they need assistance and vice versa.

This collaborative approach enables the council to prevent, detect, crack down on and reduce local crime more quickly and effectively.

They are also in contact with the local Safer Neighbourhood Teams police wards and attend ward panels and residents meetings with them regularly.

How does the LET deal with (potential) offenders?

LET officers cannot detain offenders but work closely with our CCTV unit to monitor incidents and alert blue light services if they witness any criminal or anti-social activity.

Once an offence is witnessed, LET officers can compile evidence, including on their body cameras and share information with the local police team to take further action.

What are weapon sweeps and why are they necessary?

Weapons sweeps are routine or targeted searches of particular areas like parks or housing ground, during which our officers search for any items that could be used to cause harm. This includes weapons like knifes and guns but also makeshift weapons such as screwdrivers and metal poles.

Officers will look under bushes, shrubbery or playground play equipment, using safety equipment to remove any weapons they come across safely.

The items are placed in knife tubes and taken to the nearest police station to be logged, checked and destroyed.

Why is the LET spending so much time talking to residents?

Our LET officers have a supportive presence in the community. They’re the council’s eyes and ears keeping people safe and ambassadors for its increasing community engagement.

A huge part of their role is to engage with residents to learn about their concerns and address local crime and anti-social behaviour.

The more residents work with the LET, the more local intelligence, such as location and time of day when offences occur, can be gathered, enabling the team to deter crime and nuisance through more targeted patrols.

How do I recognise the LET?

LET officers are easily recognisable by their uniform – red tie, high-vis jacket and hat – and will always identify themselves as council officers through their H&F staff and warrant cards.

If you see them out and about and want to say hello or need help, please approach them.

Why was the LET created and who is it funded by?

Although funding policing is the responsibility of national and regional governments, we have deployed 72 new Law Enforcement Officers onto the streets of H&F because the council is determined to do everything within its power to keep people safe.

As violent crime in the UK rose and police numbers across London declined, H&F’s LET came in as an important extra force.

They form the most public facing part of the council’s record £4.6m a year investment in crime-fighting, which (apart from the LET) includes:

How are officers getting from A to B?

While LET officers are routinely allocated to specific areas of the borough, they can be moved around quickly in response to incidents, sometimes by using one of their dedicated electric vehicles.

The LET’s next 24-hour operation will take place on Wednesday, 16 February in Brackenbury Village.