Hammersmith Bridge – all you need to know and latest updates

Included on this page

The closure and re-opening of Hammersmith Bridge

In the preceding hours new sensors positioned throughout the suspension structure alerted engineers to a rapid and sudden increase in the size of dangerous micro-fractures in the cast iron pedestals that hold the suspension system in place.

The heatwave was the most likely cause. The micro-fractures were first discovered in 2019 using the latest technology. Cast iron is brittle and can shatter. The micro-fractures therefore posed the serious risk that the bridge could suddenly, and with little warning, collapse into the Thames.

Up until 10 April 2019, Hammersmith Bridge carried 22,000 motor vehicles a day. Up until 13 August 2020, hundreds of boats travelled underneath it and 16,000 pedestrians and cyclists travelled across it each day.

How did this happen?

Engineers employed by Hammersmith & Fulham Council discovered that the microfractures are a consequence of decades of unchecked corrosion that is riddled throughout the suspension structure.

These very serious problems only began to be discovered from 2015 onwards because in 2014, the current administration commissioned a Comprehensive Structural Integrity Review – the first in the bridge’s history. Prior to that, only £250,000 had been spent touching up the decking and other minor works.

The council and Transport for London employed some of the best engineers in the world and tasked them with fully diagnosing all the problems with Hammersmith Bridge and developing a plan to make it safe and fit for purpose. The engineers have huge experience including working on the Golden Gate Bridge in California and on oil rigs in the North Sea.

‘Shovel-ready’ plans to fix the bridge

The engineers have advised it will cost: £46million to stabilise Hammersmith Bridge and make it safe for pedestrians, cyclists and river traffic; up to £141million to fully restore the bridge so it can be reopened to buses and motor vehicles; and £163million if we wished to reduce the three-year timescale by as much as twelve months.

No council has that sort of money available. Over the last 18 months, TfL has made a series of bids to government for funding of the Hammersmith Bridge works which have all be rejected. On 24 August 2020, the Leader of Hammersmith & Fulham Cllr Stephen Cowan and Cllr Gareth Roberts, Leader of Richmond Council, sent a joint letter to the Prime Minister asking for the government’s financial support.

Following the letter to the Prime Minister, on 9 September 2020 the Secretary of State for Transport Grant Shapps announced he was setting up a government taskforce, which would take over the project and work up solutions. Members of the taskforce include Cllr Cowan, the Deputy London Mayor for Transport for London, the CEO of the Port of London Authority, the Leader of Richmond Council and respective officials. It is chaired by Baroness Vere of Norbiton who is a Parliamentary Under Secretary of State at the Department for Transport. The project director is Dana Skelley.

An innovative proposal from world leading engineers could see Hammersmith Bridge re-opened three years earlier than planned, with a cost saving of £40m.

The double-decker solution from globally renowned architects and engineers Foster + Partners and specialist bridge engineers COWI would see a temporary truss laid over the existing carriageway allowing cars and buses to cross.

Funding the repair and restoration

On 19 February 2021, in response to a request from the Secretary of State for Transport, H&F submitted an Outline Financial Plan to the Department for Transport (DfT). The 108-page report detailed funding and future governance options for Hammersmith Bridge, including toll and road charging proposals, to provide the best value for local and national taxpayers. As of 23 June 2021, no response had yet been received from the Department. LBHF continues to develop this work.

On 1 June 2021, it was announced by the Government that, as part of its latest funding and financing package for Transport for London (TfL), the DfT, TfL and LBHF hope to develop a Memorandum of Understanding in relation to the funding of the project. Each party would agree to pay a share of the cost. Repair costs are to be led by H&F and TfL, with the Government contributing one-third of the costs.

At the Government Taskforce of 3 June 2021, it was noted that the advice of engineers commissioned by H&Fand TfL is still being developed and agreed it is important to conclude which option will determine the way forward by the end of the month. This work is ongoing.

The Taskforce was informed that no borough Council has ever paid 33% of repair works for any London bridges. H&F had already committed £8.6m. Historically, TfL has paid 85% for repair works on London bridges owned by borough councils.

As Hammersmith Bridge is exceptional in being one of the world’s oldest mechanical suspension bridges and one of the most expensive bridges to repair and maintain in the United Kingdom, LBHF questioned why any further contribution should be required in such circumstances - let alone a baseless and unprecedented 33%.

The bridge reopened to pedestrians, cyclists and river traffic on Saturday 17 July following the expert advice from the CCSO safety engineers.

Announcing the move, H&F Leader Cllr Stephen Cowan said “The potential for catastrophic collapse of this 134-year-old suspension structure was very real. We’ve employed the best engineers from around the world who advised we had to close the bridge last summer. We will always put the safety of the public first.

“Ever since, I have been determined to re-open the bridge as soon as it was safely possible. The introduction of the temperature control system, and the results of our extensive engineering investigations, now mean that the bridge can be opened for use by pedestrians, cyclists and to river traffic.”

Briefing note to H&F Council from Board for the Case for the Continued Safe Operation of Hammersmith Bridge, July 2021 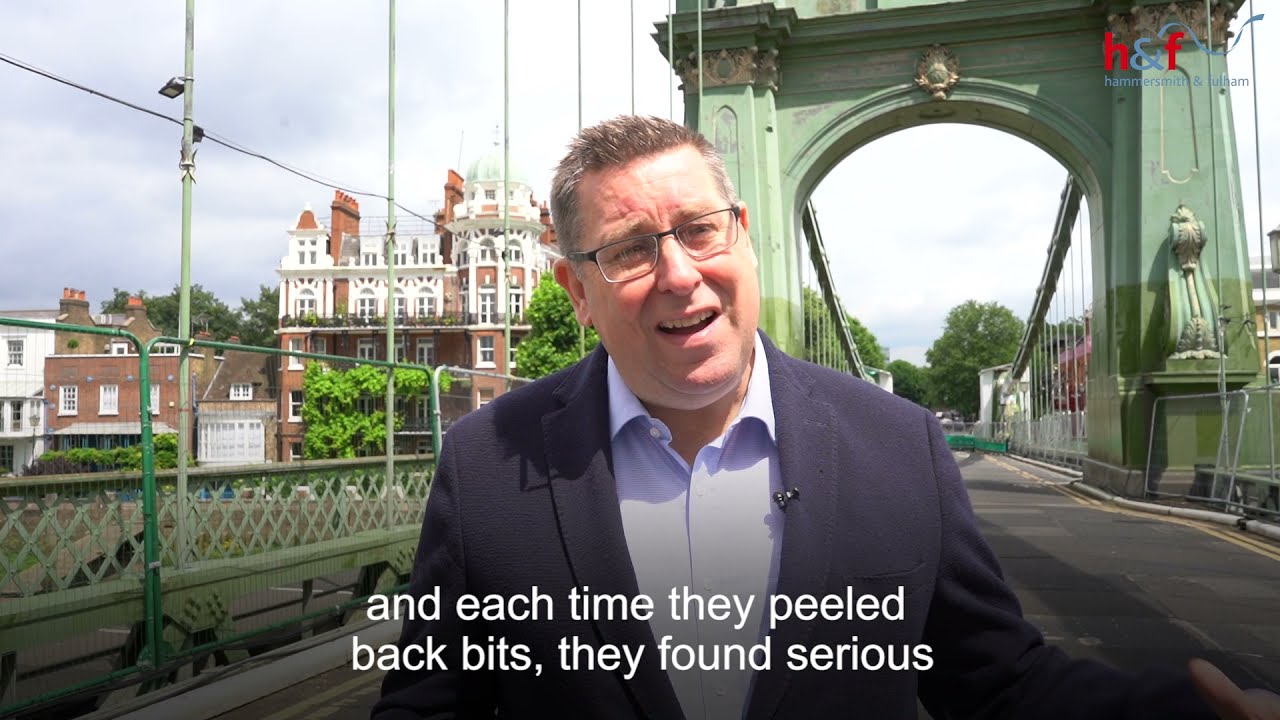 Q&As – all you need to know

Here are some facts that will explain what has happened with the 133-year-old suspension bridge, why major works are necessary and what H&F is doing to mitigate the impact of the closure.

All links in the following Q&As open in a new window or tab.

Plans for a ferry

Before submitting a Freedom of Information request regarding Hammersmith Bridge, you might consider reviewing the Disclosure Log