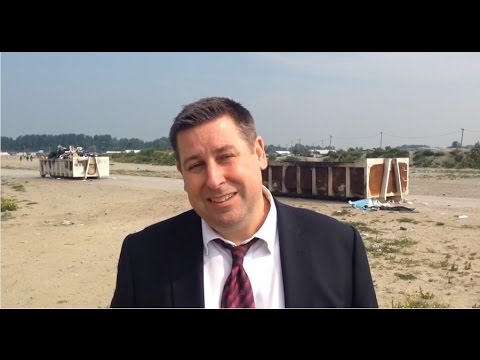 The Leader of Hammersmith & Fulham Council is visiting Calais to step up attempts to find homes for some of the world’s most vulnerable children.

Hammersmith & Fulham Council is prepared to take at least 10 children as part of the Dubs amendment in the House of Lords earlier this year which forced the Government to say it would take some child refugees.

H&F Council Leader Stephen Cowan has been working closely with Lord Dubs, as well as campaign group Citizens UK, who organised the delegation, to help the 608 children currently trapped in the Calais ‘jungle’.

“This is a crisis. I don’t think we can walk by on the other side of the street,” said Cllr Cowan.

“There is a moral imperative that we act, and we want to do more than our bit. We can’t look the other way. Just as we are improving our approach to the kids that need our help in Hammersmith & Fulham, we must do the same for those in desperate need in Calais.

“Our guiding principle is a simple one – making sure that the children we look after in the borough are safe and receive the best care and support possible, while doing all we can to help those children across the Channel.

“The Calais ‘jungle’ has been described by people who have visited as the worst type of hell. As a child you should always have faith that adults will act in your best interest, but that’s not happening here. We need to create a sense of national outrage – we will not look the other way.”

Cllr Cowan met in late July with its children’s services team to assess how many children they could accommodate from Calais urgently.

He said the council has the capacity to help at least 10 unaccompanied children from the camp, as soon as the Home Office gave permission for them to travel, and that foster homes were being lined up, with the council also urgently working to recruit more foster carers so it can help more. The campaign group Citizens UK is trying to rally other councils to speed up their search for suitable homes for the Dubs children.

Cllr Cowan and Lord Dubs have asked to meet with the relevant Home Office minister as soon as possible.