From the archives: VE Day 1945 in Hammersmith & Fulham

When the Second World War ended in Europe, Tuesday 8 May 1945 was declared a public holiday... and the Wednesday too!

The first whispers about an end to hostilities had come through two days earlier, with unconfirmed rumours that the Nazi commander in Norway had offered to surrender.

But intriguingly it was a Fulham lad – Lance Sgt Hugh Brown of the Royal Signals – who actually brought the Second World War to an end. As the personal wireless operator to Field Marshall Montgomery, it was he who sent the signal to German HQ that their forces in the field were surrendering.

By Monday 7 May it was official, with a BBC announcement that the prime minister, Winston Churchill (he didn’t become Sir Winston for a further eight years) would address the nation on the wireless at 3pm the next day.

But people couldn’t wait that long, and celebrations started as news of the end of the war in Europe spread. On that Monday night, Hammersmith Broadway turned into a giant spontaneous dancefloor, with loudspeakers on shop roofs blaring out music. Ravenscourt Park also held an impromptu dance party.

In Dieppe Street, West Kensington (now part of the Gibbs Green estate), which had been laid waste in heavy bombing, the first celebratory bonfire of many was lit.

On 8 May, a glorious sunny day, people headed into the centre of London to celebrate together outside Buckingham Palace, while Whitehall was packed to acknowledge war leader Winston Churchill giving the V-for-victory sign from a balcony.

Then residents drifted back to Fulham and Hammersmith to carry on partying. At 9pm the revelry briefly paused while people gathered to listen to the King’s broadcast in which he spoke of ‘the dreadful shadow of war passing from our hearths and homes’.

The partying quickly resumed afterwards, with the pubs’ strict closing times being abandoned for the night. With the police turning a blind eye, there was not a single arrest for drunkenness. 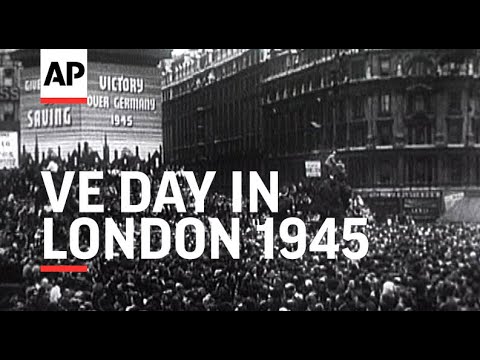 Winston Churchill said on 8 May 1945: “My dear friends, this is your hour. This is not victory of a party or of any class. It’s a victory of the great British nation as a whole. We were the first, in this ancient island, to draw the sword against tyranny. After a while we were left all alone against the most tremendous military power that has been seen.”

Today we celebrate the 75th Anniversary of VE Day by remembering all those from Hammersmith & Fulham who served or suffered during the war. We thank them for their sacrifices and for all that they did for our borough and for our country.

The dance everyone was doing was the jitterbug, a type of swing which had been imported from America when US troops gathered in Britain for D-Day in 1944, and which had turned into the craze of the day.

Everyone wanted to climb something to get a view of the celebrations as the day-and-night shifts at factories and workshops in west London, all geared to turning out war equipment, suddenly ended.

As VE Day coincided with the regular weekly meeting of Hammersmith’s OAPs’ group, it was initially going to be postponed. But members decided they’d rather join the celebrations, so entertainer Jack Barnes and his concert party provided a singalong.

Years later, the one thing many H&F residents could clearly recall was the novelty of seeing lights on in people’s windows. Some used their Christmas tree lights to spell out the letter V.

The mayor of Hammersmith, Cllr Fred Brader, who served two successive years in office, gave a moving speech from the steps of Hammersmith Town Hall.

“This is the day we have been waiting, on our toes, for. It’s the day we’ve been hoping for, for at least five years,” he said.

“I’m am proud to be mayor of Hammersmith on this occasion, and to be associated with the work people of the borough, who have shown that they can ‘take it’, and have taken it! The people well deserve the two days’ holiday which has come with the cessation of hostilities in Europe.”

The scenes were replicated outside Fulham Town Hall – then a separate borough – where Cllr John Perotti was the jubilant mayor, addressing the people in Fulham Broadway by loudspeaker from the balcony of a building draped with the flags of the Allies.

Shepherds Bush Green filled with people listening to the Hammersmith Borough Band, which put together a programme of music. The next day, the Lime Grove baths hall staged a dance.

Furnivall Garden in Hammersmith was the scene of an enormous bonfire, ceremonially lit by the mayor at 10.15pm on VE night.

Rationing rules had been lifted on buying red, white and blue material to make flags and street bunting, allowing communities could decorate their roads. Trestle tables were borrowed from church halls and placed down the middle of roads.

Residents covered the nearest one with tablecloths, cups and plates, and put candles in jam jars to complete the scene.

West London’s ovens were soon churning out buns and cakes, pooling what was left of the carefully stored rations... and using dried egg.

Other treats were bought from the grocery shops after house-to-house collections, when everyone was asked to contribute one or two shillings (5p-10p).

Schools were closed, neighbours embraced and traipsed in and out of each other’s homes, drinking cuppas or sherries. Buildings which had survived the bombing were defiantly floodlit.

Children – mostly mystified by the jubilant drunkenness and abandon of the adults all around them – were given commemorative mugs, while spare pieces of paper and cloth were used to create party hats.

Costumes were made using the blackout curtains which had, until then, masked every home’s windows to try to confuse Nazi bombers.

As well as streets being closed off for parties, blocks of flats also staged their own knees-ups in communal areas, often with the trestle tables laid out to form V shapes for victory.

Both the Fulham and Hammersmith mayors did their best to get around as many street parties as they could. Cllr Brader presented gifts at two of the gatherings – in Brackenbury Road and in Carthew Road – to two repatriated prisoners of war, back from long spells in prison camps.

Around 90 children were given orange squash and cake in Claybrooke Road, Fulham, where the deputy mayor judged a fancy dress competition. That was followed by street sports, and a firework display, attended by wounded prisoners of war from Fulham Hospital.

There was a VE Day wedding at Fulham Town Hall’s register office when marine Roderick Lofting married Freda Browne, with Fulham’s mayor and mayoress popping in to congratulate them on their choice of day.

For the first time in six years, lights could shine without an air raid warden ordering them to be turned off. The only limit on the celebrating was the knowledge that war in the Far East was still continuing.

In Banim Street, Hammersmith, the landlord of the Royal Oak in Glenthorne Road organised a street party for children on 20 May, with every child being given membership of the Daily Sketch Victory League (which came with hat and badge).

Cllr Brader – who was getting very little sleep – was guest of honour, and joined in the community singing led by Lil Pether. There was also a Punch and Judy show outside the pub.

Over in Bolingbroke Road, West Ken, 50 children sat down to tea and were entertained by Wee Georgie Wood, a music hall comedian and film star just 4ft 9in tall, whose stage act involved him pretending to be a child.

Typically, children who attended were given mugs (sometimes with a coin or two in them), oranges and books. Some even received post office savings books with a starting balance of a few bob. Tug-of-war competitions were staged between rival roads.

The youngsters of Lewis Buildings, Walham Green, were treated to a trip to the flicks. Eighty of them enjoyed a free show at the Broadway Gardens cinema before tucking in to a tea of cake, blancmange, jelly, sandwiches and 300 sausage rolls.

Bonfires were lit on bombsites, streets and patches of open ground, with chains of revellers doing the conga around them, while gramophone records played from open windows and musicians improvised in the street.

The bonfires were topped with Hitler ‘guys’, while other effigies of the Nazi leader were strung up from lampposts. Pianos were pushed out into front gardens to add to the music.

All three of the borough’s parks in Fulham hosted parties, and even pet dogs were dressed up in red, white and blue rosettes and ribbons.

The Sunday services in Hammersmith and Fulham churches (which had signalled the end of war in Europe by ringing their bells) were so well attended that extra ones had to be squeezed in.

For non-churchgoers who nevertheless felt they wanted to join in a communal gathering to mark the occasion, a special non-denominational open-air service of thanksgiving was held at 3.30pm on Sunday 13 May at the bandstand at Ravenscourt Park.

At every service, the collection money went towards repairing damaged churches across Europe, or providing hospital care for wounded service personnel and civilians.

The build-up to the Ravenscourt Park open-air event was impressive. Cllr Brader, other councillors and civic dignitaries gathered at 2.30pm with members of the Home Guard – the ‘Dads’ Army’ that had taken over many of the duties of the police and military in the borough – at Hammersmith Town Hall in King Street.

They were joined by scout groups, youth clubs and war workers. The town hall itself had been decorated with bunting and draped in flags.

From there they marched, to the cheers of residents on pavements and at windows, in a civic procession to the park (at that time a largely open space, as many of the railings had been removed to make munitions, tanks and aircraft).

The local newspapers in west London were full of reports on the celebrations… and adverts for headache tablets for those who had gone a little too far!

Gladys Mair-Schubert wrote a commemorative poem, which appeared in the West London Observer. It summed up the mood in Hammersmith and Fulham. It began:

This is the day we’ve been waiting for,
The day with a very big V
When all the church bells shall peal with joy
To ring out the Victory.

We’ve surely a right to feel happy,
To know that the struggle is o’er,
For we’ve fought a tremendous battle,
To end this terrible German war.