The brightest young stars from across the borough have been honoured for their leadership and volunteering by Hammersmith & Fulham Council.

More than a dozen outstanding young people picked up gongs at our Youth Achievement Awards. Education, volunteering, creativity, overcoming adversity and promoting environmental change were among the achievements recognised at the awards, which were streamed live from St Paul’s Church in Hammersmith on Tuesday 4 May.

“I am encouraged by our young people – particularly the people who’ve got involved in civic life in H&F or have taken part in the many kindnesses that make us stronger,” said H&F Leader Stephen Cowan as he opened the event.

“When that baton is passed to you, you will run hard at the future, change history, and making the world a better, kinder, environmentally stronger, and much more compassionate society than it has ever been before.” 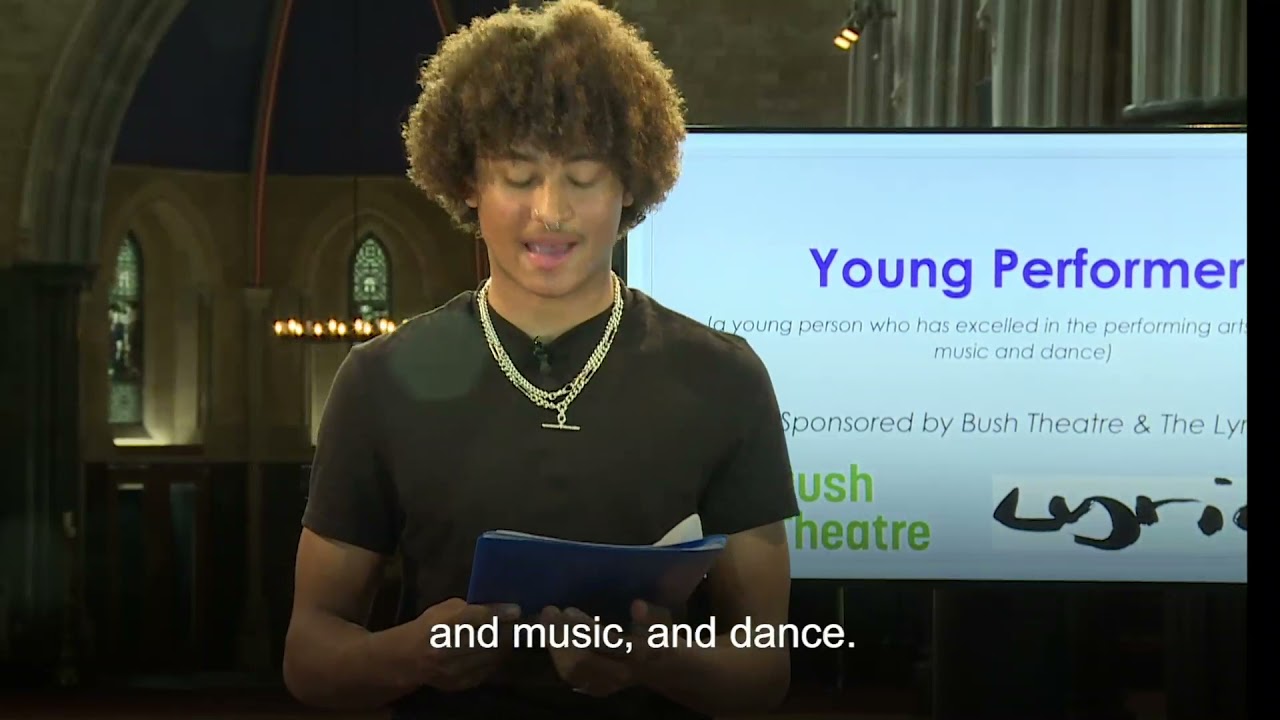 Winners and runners up

Winners and runners up were chosen across 11 categories, with the awards kicking off by recognising the achievements of a group of friends who went the extra mile to help youngsters struggling during the pandemic.

The award for those making a significant contribution to others was given to Harper Smithard Bailey, Alice Rhys Matthews, Kyra Gulamhuseinwala, Alex Dimitriou and Olivia Broadhurst for organising a tech donation drive to assist pupils across the borough. It led to more than 100 devices and at least £5,200 donated to help local families through the Ready Tech Go social enterprise.

In the Young Leader category, Ali Ghaderi was recognised for his work raising climate change awareness and bringing attention to the ban on asylum seekers working through speaking at the House of Commons, as well as local charity volunteering.

A pioneering project to create a solar-powered vehicle that would help women and children carry water in developing countries caught the eye of judges in the Young Innovator category.

Barakatullah Kuchai, 15, said he was “surprised and delighted” to win the award after just three years in the UK following a move from Afghanistan.

“It is a big thing for me, because there are so many other great nominations,” said the Year 10 pupil from Fulham Cross Academy. “My whole family has been very excited and I think the award will help me a lot in my career, as I want to go into engineering and technology.”

Inspired by his dad, a trained civil engineer who is currently studying for a doctorate in building physics, Barakatullah added he hopes to pursue his dreams at university in Cambridge or London.

After more than a year of the pandemic creating challenges and heartache for people across the borough, Nina Anderson was recognised for her work as a Covid Champion.

In April last year, just after the first lockdown, Nina set up Community Senior Letters, a non-profit community project that matches students in schools with residents in care homes, providing the elderly with human connection to help ease feelings of isolation and loneliness.

The project has extended to pupils from more than 250 schools across the world writing hundreds of thousands of letters over the past year to elderly people.

Another key focus for the future is climate action and Year 12 pupil Tian Hsu was celebrated as H&F’s Green Champion for her dedication to positive environmental change.

The pupil from St Paul’s Girls’ School is a leading member of the London Schools Eco-Network and was an ambassador for November’s Youth Climate Summit, as well as running a weekly discussion group open to young people from all schools.

The Achievement in Education award was handed to Bilal Samar, who impressed tutors at South Thames College with his work ethic in the face of multiple challenges

Working to help homeless people during the pandemic alongside the Under One Sky organisation saw Hazel Genieser awarded the top spot for Young Volunteer, after she launched a youth initiative bringing her classmates on board the charitable project.

Young Performer of the Year

The awards also recognised excellence in performance and arts, with Molly Craze-Williams scooping Young Performer of the Year for her collaboration with the Bush Theatre, which led to the budding playwright creating and performing her own project on abusive relationships.

Camille Hodder, who has cerebral palsy and visual impairment, was celebrated in the Young Artist category for her dedication to writing children’s novels in her spare time, which she hopes to publish in the future.

The 20-year-old, who is part of a traineeship at the Town Hall and studies at West London College, said she was “shaking and crying” when she found out she had won.

“It was such a surprise and I feel so proud of myself,” said Camille. “But for me, it’s not just about winning, but about giving yourself the best possible chance in life.”

In addition, H&F Mencap Youth Development Project was handed the Contribution to Young People award, for its tailor-made programmes offering support to young people with complex needs aged 13-25. While Khani Hills was recognised in the Overcoming Adversity category.

Organised by H&F’s Youth Council and the Young Hammersmith & Fulham Foundation, with the support of local businesses and organisations, the awards were a chance for peers, teachers, youth or social workers and practitioners to recognise the contribution made by young people aged 11-25 over the past two years.

Young person who has made a significant contribution to others