“Since our first traffic-free market in North End Road in December 2014, we’ve built what has to be the largest Christmas street market in London, if not the country,” said Ben Coleman, Cabinet Member for Resident Satisfaction. “My thanks to all the residents who’ve worked so hard with the council to create this success.”

Made in Chelsea star Georgia “Toff” Toffolo joined in the fun to switch on the road’s Christmas lights.

“We’re so lucky to have this market”, said Georgia, “I live just around the corner and I come three to four times a week to pick up my fruit and veg but when we get the road closed and have a day like today it’s really special.”

Watch our video clip of the event: 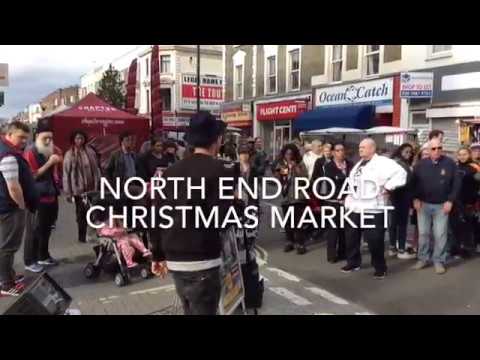 “The Christmas Market has been great,” he said. “Lots and lots of people, a great atmosphere and the weather’s been on our side.

“My favourite part of the day was when the classical music band, the ZHL String Ensemble, played right next to us and created a really good atmosphere.”

There were a wide range of traders, including Celestina Rose Jewellery, Insane Clothing featuring hand-drawn designs, Home at Christmas who sold festive decorations, as well as a range of charities and other organisations.

Sir John Lillie Primary School took a stall to sell bags hand-painted by pupils with North End Road-inspired designs. “It’s a brilliant opportunity for the community to get together,” said teacher Andrea Thompson. “It’s been lovely having children, teachers and staff out being part of the community.”

In late 2014, councillors brought stallholders and businesses together in the North End Road Action Group (NERAG). Since then, the council has been working closely with NERAG to renew and strengthen North End Road as a shopping destination.